Everything you need to know about Kaanapali, Lahaina and Kapalua.

Three miles of West Maui’s sandy shoreline, plus dazzling sunsets and daytime views of the islands of Lāna‘i and Moloka‘i — no wonder as many as a half a million people every year stay and play in Kā‘anapali, the first master-planned resort in the state of Hawai‘i. Opened in 1962, the 1,200-acre playground north of Lahaina also offers championship golf courses with the West Maui Mountains (Kahālāwai) as a backdrop; more than a dozen hotels, condo complexes and timeshare properties, most just off the boardwalk-lined beach; and two shopping centers that also boast a smorgasbord of dining options.

Kā‘anapali  means “the cliffs of Kā‘ana.” Dark lava boulders line its iconic cliff of Pu‘u Keka‘a, also nicknamed “Black Rock,” which separates Kā‘anapali Beach on the southern end of the resort from Kahekili Beach on its northern end. Renowned as a snorkeling site in calm conditions, the promontory  has also gained fame for the cliff-diving ceremony hosted by the Sheraton Maui Resort & Spa, which has some rooms built right on its rocks. Announced at sunset by the lighting of tiki torches and the blowing of  a conch shell, the nightly leap by a young islander pays tribute to the diving feats of last independent chief of Maui, Kahekili. Hawaiian tradition also holds that spirits leaped into the afterlife from the cliff.

History: In the 15th century, when the area served as Maui’s capital, a chief named Kaka‘alaneo lived near Pu‘u Keka‘a. Kahekili found his son Kaululā‘au so troublesome, he banished him to Lāna‘i, which was thought to be inhabited by spirits. But Kaululā‘au eventually vanquished all the ghosts, and ruled over a new colony on the island before returning to lead his people at Pu‘u Keka‘a.

By the 1860s,  American and German businessmen had established sugarcane plantations in the area. In the 1930s, the Pioneer Mill Company was producing sugar from more than 10,000 acres. The onset of jet travel, increasing global competition in agriculture and statehood in 1959 prompted Amfac, the owners of the Pioneer Mill, to develop Kā‘anapali as a travel destination. Designed by Robert Trent Jones Sr., the 18-hole Royal Kā‘anapali golf course debuted in December 1962, along with the Royal Lahaina Beach Club. The sprawling grounds and buildings of the Sheraton Maui followed in 1963, while Kā‘anapali’s most recent vacation rentals, Luana Garden Villas, debuted in late 2019.

What to Do Near Kaanapali 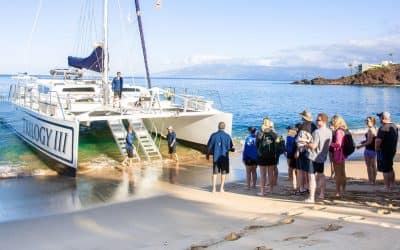 Where to Stay in Kaanapali, Lahaina and Kapalua

Where to Eat in Kaanapali, Lahaina and Kapalua

MAY: While onions on the mainland are known for drawing tears and tasting strong, Maui Onions are known for their sweetness. The Maui Onion Festival is dedicated to cultivation and promotion of  the Maui Onions’ unique flavor yearly. The festival includes chef demonstrations, competitions and entertainment of various kinds.

APRIL: Known as one of the best cultural events in Hawaii, the Celebration of the Arts Festival honors a variety of mediums of Hawaiian art. The festival includes traditional ceremonies and training sessions to rejuvenate body and spirit as well as hands-on art demonstrations. Take part in celebrating Lahaina’s oldest landmark at the Banyan Tree Birthday celebration. The celebration includes cake, local art, live music and more.

JUNE: Are you a food and wine finatic? If so, the Kapalua Wine and Food Festival is calling your name. Known as the most prestigious culinary festival in the state of Hawaii, the four-day program includes cooking demonstrations, wine and food pairings, golf, tennis, a wine tour, evening galas and more. Make sure to purchase your ticket early!

NOVEMBER: The Hula dance is woven into the fabric of traditional Hawaiian culture. Hula was the primary way to tell stories, share history and honor royalty. The Hula O Nā Keiki, a children’s Hula competition honors the Hula and educates children about the Hula’s ancestral significance.