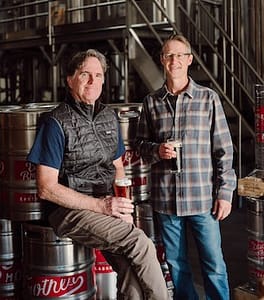 East Brother Beer Co. is a Northern California brewery that was born from a shared passion for classic craft-style beer and genuine hard-working heritage. For co-founders and California natives Chris Coomber and Rob Lightner, Northern California is home; they worked and built businesses here, raised their families, and now brew beer that fits the region’s lifestyle and spirit.

After years of backyard brewing and perfecting recipes, Chris and Rob launched East Brother Beer in 2016; the brewery and taproom are located in a warehouse in the “city of Pride and Purpose,” Richmond, CA. For the past five years, Chris and Rob have stayed true to the mission of brewing classic, easy-drinking styles. And their commitment to crafting lagers has paid off with the brewery receiving awards and accolades: Bo Pils earning two medals: the California Craft Brewers Cup (Gold) and the Great American Beer Festival (Silver), and the Oatmeal Stout, with a Gold medal at the California State Fair and the highest rated stout from Beer Connoisseur Magazine.

With success comes innovation, and the opportunity to double down on the lager-centric approach by adding a seasonal Lager Series to complement the portfolio of core beers. This is where the team at East Brother experiments with creativity, sourcing locally from hops farmers and partners like Admiral Maltings, to create their twist on the traditional Baltic Porter, Festbier, Maibock and more.

We invite you to learn more about East Brother Beer by visiting eastbrotherbeer.com or visiting the brewery’s taproom. East Brother’s beer is available for shipping throughout California in mixed packs, through the brewery’s subscription Beer Box and pop-up Festival Booth in a Box. Use offer code GETAWAY21 for 15% off your first month’s subscription or 15% off your Festival Box purchase.

Stocking up on beer has never been easier! Just choose how much beer you want and up to two of your favorite beer styles, and we’ll take it from there. Your Beer Box will typically arrive on the second Friday of every month, just in time for the weekend. Shipping costs are included!

Just order our Festival Booth In a Box. It comes with everything you need to recreate the Beer Festival experience from the comfort of your home.
KIT INCLUDES:
– Variety 6-Pack, 16oz cans Our 5 core beers and one seasonal
– Pretzel Necklace
– Stickers and Buttons
– EBB Taster Cup