Everything you need to know about visiting Ko Olina.

There’s a good reason the Disney Company decided to build its first resort without an attached theme park in Ko Olina, a 642-acre resort near Oahu’s southwest corner. Not only is the weather reliably dry and sunny most of the year, but its four pristine ocean lagoons with manicured lawns already looked like something out of Disneyland. Disney’s Aulani resort stands in good company: The islands’ newest Four Seasons hotel offers superlative spa and dining experiences from its discreet perch next door, while a 1.5-mile curving paved pathway — great for sunset gazing and winter whale watching — leads past the lagoons and two condo-style resorts to the Ko Olina Marina and a variety of water-based excursions.

You could spend a week in relative tranquility on the resort, which also includes a championship golf course, a popular luau (in one of three natural coves in the area), fine and casual dining, plus a few shops. Or you could take advantage of a head start over Waikiki visitors to hike to Ka‘ena Point on the island’s northwest tip. Day trips to the North Shore are also easy, once you’ve let the morning rush hour to Honolulu pass. For more shopping, dining and entertainment options (including a water-ride theme park), Oahu’s “second city” of Kapolei lies a short drive away.

History: Ko Olina means “place of joy” in Hawaiian (ko ‘olina). Generations of Hawaiian chiefs and royalty, including King Kamehameha the Great, found their happy place amid its original sheltered coves in the otherwise arid region known as the ‘Ewa Plain. In 1877, James Campbell paid $95,000 for 41,000 acres of the plain that included Ko Olina’s oceanfront oases. A successful Maui sugar cane plantation owner who had married into Hawaiian nobility, James drilled the region’s first artesian well for his new plantation. (A restored historic train from the era still runs through the resort on weekends.) When Campbell died in 1900, he left an estate of $3 million and plans for what would become Ko Olina and Kapolei.

What to Do in Ko Olina

Where to Stay in Ko Olina 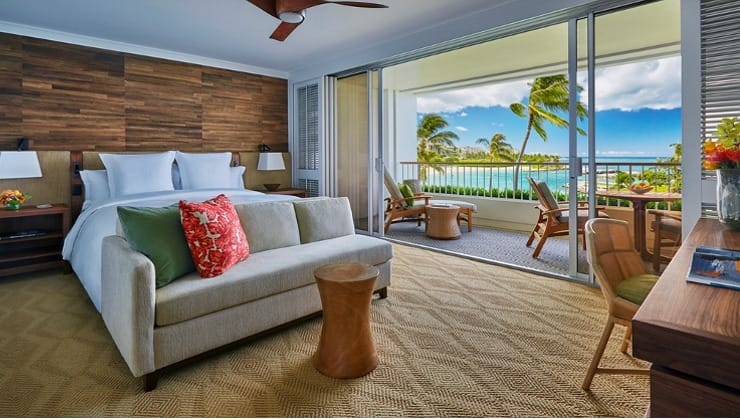 Where to Eat in Ko Olina

APRIL: Trade your bathing suit for a superhero fit and enjoy a family-friendly afternoon at the Annual Ko Olina Children’s Festival. The festival includes activities, movies, performances, and more. All revenue from ticket sales go to Kapiolani Medical Center for Women & Children.

JUNE: There’s no better place to learn about the ocean than at the World Oceans Day Celebration around Ko Olina Lagoon #4. Spend your afternoon participating in sustainability activities, exploring food booths and then watching a movie as the sun goes down.

JULY: Take a break from the beach and head to the Ko Olina West Side Summer Fest. The festival features local fresh-farmed produce, art, music, food trucks and more.

OCTOBER: Encourage your family to stay active on vacation by participating in the Race Ko Olina. It features fitness challenges for both kids and adults. If you’re craving a culinary feast and craft cocktails, don’t miss the oceanfront Hawaii Food & Wine Festival featuring more than 100 internationally renowned vintners.

*Things change, so please check with the organizers of these events to make sure they are still happening.