Do you know the origin of the word “cioppino”? Or that the tequila sunrise was actually invented at Sausalito’s Trident restaurant and made famous by the Rolling Stones? And that Marin’s popular pancake joint, The Lighthouse, was started by a Danish couple who knew almost nothing about American breakfast foods before opening their doors?

These are just a few tasty tidbits one can pick up from listening to The Barfly podcast (available on iTunes and Spotify), which like many great ideas, was conceived in a bar. So far there are three seasons, and each episode kicks off with a catchy cover of an AC/DC song by one-time Foghat frontman Phil Nudelman, with vocals by Marin singer Holly Stanton. It’s as local as it gets.

Here, we turn the tables on the duo behind the podcast, celebrated author, Marin IJ columnist and bartender Jeff Burkhart and Kevin Blum, restaurant promoter and former community director at Yelp. 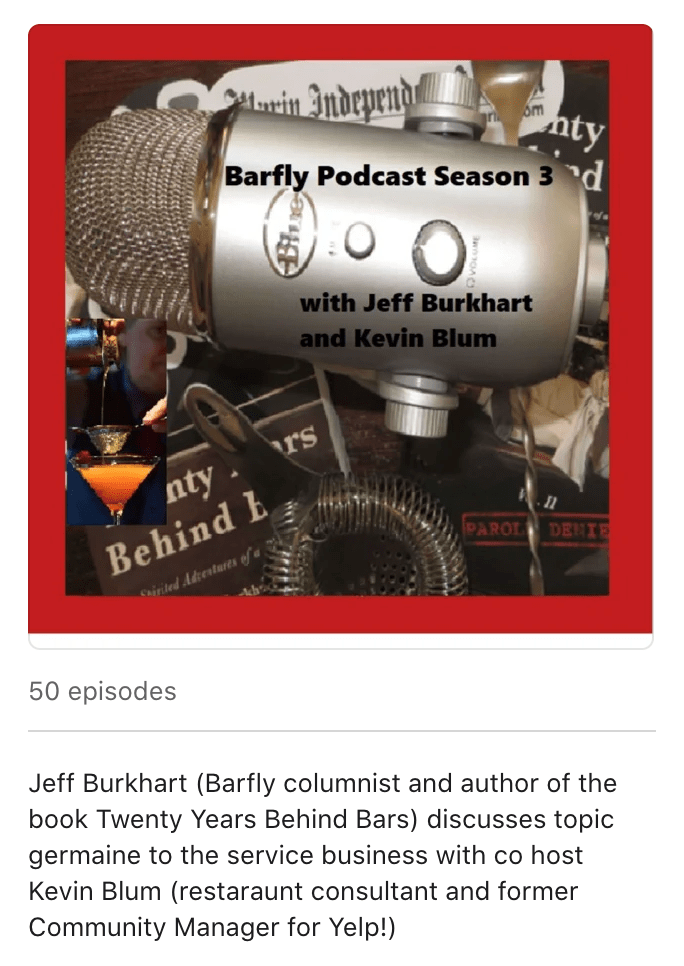 When did the idea first come to you guys to partner up?

Burkhart: Kevin and I had both been invited to be judges at a celebrity chef cook-off charity event in Sausalito. We had a natural rapport. I was looking for unique ways to promote my newest book, and I suggested we do some in-person talks. The logistics involved were awkward, and we were concerned because we both had high-profile, public-facing jobs and might get exposed to some “haters” out there. We were discussing all of that at a bar, when the bartender, a mutual friend, suggested we do a podcast — a perfect solution, from a person dispensing solutions!

Blum: I had been a longtime fan of his “Barfly” column (in the Marin Independent Journal). We immediately hit it off. I looped him into a few cocktail events I was hosting while at Yelp. Neither of us knew the first thing about producing podcasts, but we figured, why the hell not? And here we are three years later!

Is Kevin always the co-host?

Blum: Yes, I’ve been Jeff’s podcast co-host/”bar-back” these past three years, and I’ll keep doing it until he wisens up and finds someone better for the job.

What have you learned in three seasons?

Burkhart: That everybody in the restaurant and bar business has a tale (or two) to tell, and they’re usually more than willing to share it!

Blum: First, during this crazy pandemic year, so many business owners have not only taken lemons and made lemonade, but they’ve also used this time to create some pretty impressive lemonade stands. The old proverb has never been more true: “Necessity is the mother of invention.” Translation: If you really need to survive, then you’ll find a way of doing it.

Third, restaurants and bars aren’t just about making great food and drinks. At the end of the day, it’s all about creating community. We connect with others over food and drinks. During this past year, that sense of community is one of the things that we’ve been missing the most, and I’m so delighted to see things coming back.

Burkhart: I’d say one, Sir Francis Drake was responsible for the mojito (or the El Draque). Two: Carrot Margaritas — who’d of thunk? Thank you, Tyler Florence! And three: Organic liquor is the only liquor that needs to list its ingredients.

Can we expect a season four?

Blum: Yes! Jeff and I have spent the past season talking with restaurant and bar owners about how they’ve survived during the pandemic. Now that we’re starting to see the light at the end of the Covid-19 tunnel, it’ll be interesting to see what business owners have learned during this past year, and how they’ll implement those learnings in the future. We’re getting ready to launch a “Meet Your Makers” video series (quick cocktail tutorials with Marin’s top bartenders and distillers). It all furthers our original idea of putting a face and a personal story to a business.

The Barfly Podcast is available on iTunes, Spotify and jeffburkhart.net.

*This interview originally appeared in the June issue of Marin Magazine.

Know someone who belongs on our Community Champions page?